The QE Experiment: What Now?

In the coming days the Federal Reserve is set to end Quantitative Easing, the six year economic stimulus experiment. Quantitative Easing, or “QE” has been a hotly debated topic over the years. We have discussed its impact on markets and investor behavior often. Whatever one’s view on the moral hazards of QE, there is no denying the actions taken by the Federal Reserve over the past six years have had substantial impact on financial markets, fixed income, risk taking and volatility.

Just how much influence has QE had on financial markets?

The chart below illustrates the impact of QE on the price of the S&P 500 Index since the long-term bond purchasing program began in November 2010. The results are sobering. Since beginning QE2 in November of 2010, the S&P 500 Index has advanced more than 55% (excluding dividends). If one excludes the days where the Federal Reserve was active and only invested on days without QE, the total return is reduced to less than 8%. 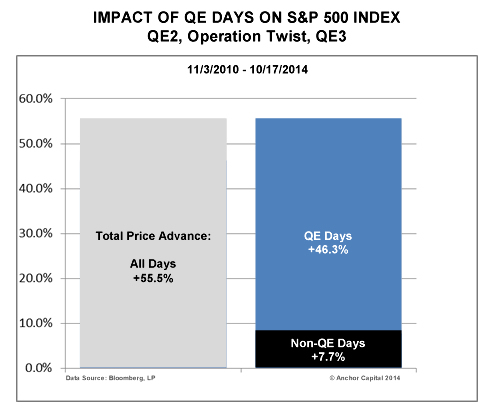 S&P 500 Index Performance is based upon price only and excludes dividends.

The Grand Quantitative Easing experiment is one of the most meaningful events in U.S. market history, the ramifications of which will be with us for years to come. With just a few QE days remaining, we think this is an ideal time to share some insights on the program, the history, stated objectives and market impact as well as a look at what may be lying ahead once the program is over.