The path of market prices for the first three months of 2013 is eerily similar to 2011 and 2012. It has gone something like this: The year begins with new optimism over the economy and stabilization in Europe, pushing stocks to new recovery highs. Then as April begins, the U.S. recovery is questioned, markets realize Europe is not fixed, and U.S. stocks erase most of their gains for the year by the end of June.

As we approach the end of the first quarter, stocks have once again delivered strong first quarter performance while negative headlines from Europe are reemerging. Is the stage is set for another April/May decline?

Here is what we are watching at Anchor Capital.

The Dow Jones Industrial Average is reaching new all time highs and media channels are counting down the points until the S&P 500 joins the record books. Many are forecasting higher stock prices, sounding the “all clear” bell for equities.

While U.S. stocks have enjoyed record gains in the first quarter, the rest of the world is not celebrating. In fact there is a wide divergence in YTD performance across regions. While the US based S&P 500 has advanced nearly 10% for the year, the International MSCI Europe Australia Far East (EAFE) Index has gained 3%, and the FTSE China 25 Index actually declining nearly 8%. 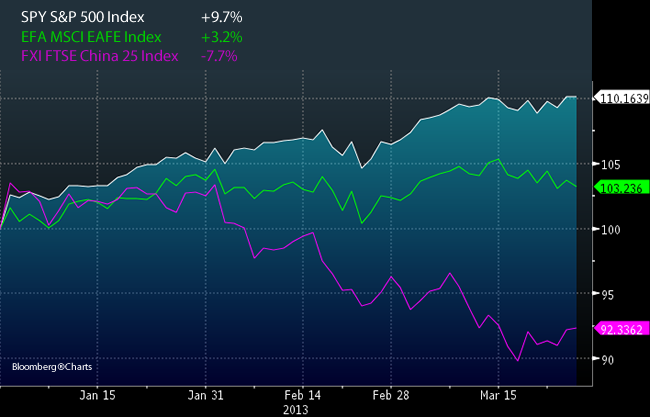 Much like this year, stocks began 2012 with an impressive rally. On April 2, 2012 the S&P 500 closed at 1419, an impressive gain of 12.8% for the year.  Improving consumer confidence and jobless claims were primary drivers to investor confidence. Then as if overnight the rally ran out of momentum, stopped dead in it’s tracks as suddenly Spain became the new Euro fear. Selling hit the markets, and by the the end of May the spectacular first quarter rally had all but been erased.

2012 First Quarter Rally Given Up on Spanish Headlines 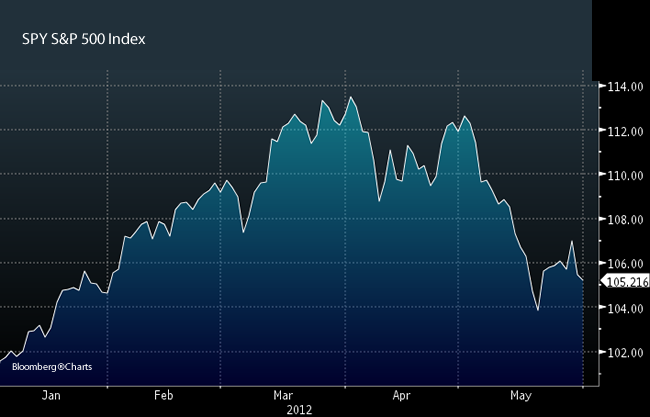 Something we are watching is the lack of broad participation this year versus last year’s first quarter advance. Notice the 2012 first quarter rally was a broad in nature. US, International and Emerging markets all participated, led by China. China was the first market to diverge in March, eventually leading global equities lower in the second quarter. 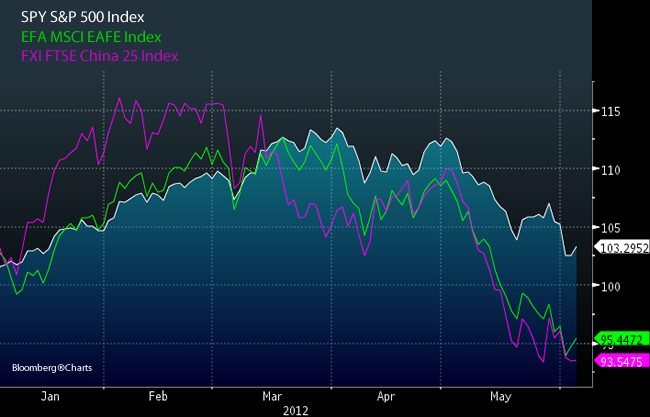 The High Yield Bond market is usually a leading indicator for risk and equity markets, and divergences should be respected.  Despite a 10% rally in stocks, High Yield Bonds have been relatively flat YTD. We observed a similar divergence last year that proceeded the second quarter equity market decline in our April 2012 commentary here. 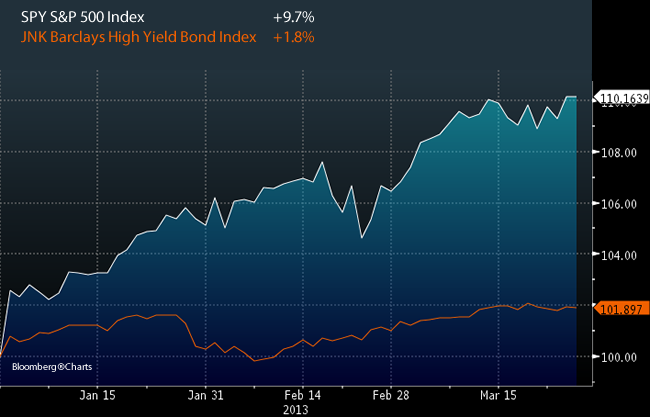 Just like 2012, with days before the end of the first quarter Cypress is suddenly the focus of the European crisis. Can we really retrace the exact path of last year, marking an exact top on April 2 and declining into the end of May? Probably not. But markets have now enjoyed an extended multi-month run with relatively little downside. US stocks have charged higher with no support from China, Emerging markets or High Yield Bonds.

Whether markets are set to mirror the past or not,  its time to prepare for volatility and pursue long-short strategies that can benefit from its inevitable return.