While stocks are off to a strong start this year, most bond indexes are down and the risks for bond investors continues to grow. The culprit? Rising interest rates. When rates rise, bond prices fall. The next Federal Open Markets Committee interest rate announcement is March 15th. What is the probability of another increase in rates? What about further rate increases this year?

One of our favorite interest rate indicators is flashing a high probability warning sign.

Beware the Ides of March

The Ides of March is a day on the Roman calendar that corresponds to March 15th, notorious as the date of the assassination of Julius Caesar in 44 BC. The death of Caesar made March 15th a turning point in Roman history, one of the key events that marked the transition from the historical period known as the Roman Republic to the Roman Empire. In William Shakespeare’s famous play Caesar receives the ominous warning from the soothsayer to “beware the Ides of March.”

Bond investors may want to heed the same March 15th warning. On March 15, 2017, the Federal Open Market Committee will make its next announcement on interest rates. What makes this meeting different from others? WIRP (Bloomberg World Interest Rate Probability) is currently showing a 100% percent probability of a rate increase up from 29% at the beginning of the year.

WIRP is a statistical function developed by Bloomberg that uses fed funds futures and options to infer the implied probability of future FOMC decisions. It can be used to calculate the chances of a rate hike at each of the FOMC meetings using futures trading data. In the past, a reading of 80 percent or higher has been associated with interest rate hikes, which is why many refer to 80 percent as WIRP’s “line in the sand.”

It is clear that the Fed aims to telegraph rate hikes in order to avoid any major surprises.  “Some 90 percent of rate hikes over the past 25 years already were highly anticipated by the market, with at least a 70 percent chance discounted in,” according to research from Goldman Sachs. An 80+ percent WIRP reading certainly meets this standard.

DoubleLine Capital CEO’s Jeff Gundlach believes that the Fed uses WIRP as one of its key indicators when mulling a rate hike. In November 2015, he stated “The Fed probably needs to see WIRP higher than 70 percent” to be comfortable with raising rates. The hike occurred on December 16, 2015, right on schedule with WIRP at 78%.

Based on our empirical observations, we seriously start considering the possibility of a Fed rate hike as the implied probability rises above the 80 percent level, and we talk about a high probability action when this probability reaches 90 to 95 percent. With the WIRP rating currently standing above 95 percent (see Figure 1), we feel that this cake is baked and will be served on March 15. 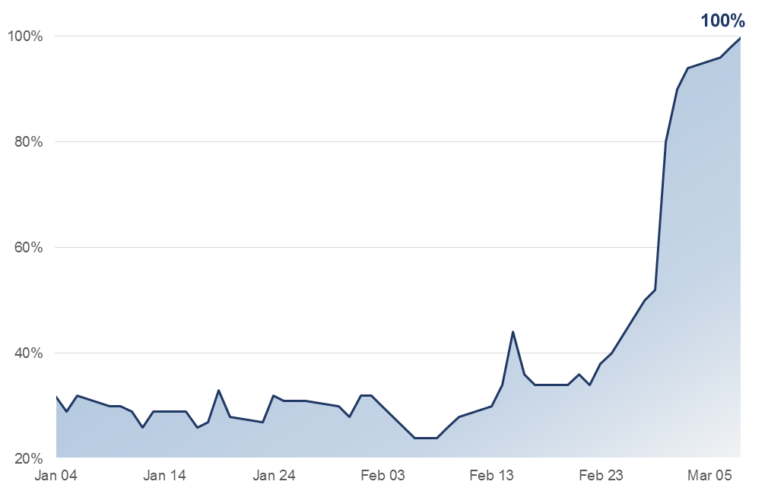 WIRP is currently indicating a probability of three or more rate hikes in 2017 is 58.8 percent, not yet at our 80% threshold but rising. Three increases of 25 basis points each would bring the fed funds rate into the 1.25 to 1.50 percent range. With the March hike a virtual certainty, we will look to the WIRP in the weeks prior to the each of the remaining FOMC meetings for a more certain indication of future rate increases.

The Federal Reserve states they are “data dependent” on these future rate increases. In the coming weeks we will take a look at the data they are watching as another clue to the Fed’s path to higher interest rates.  We will also address how rising rates affect Fixed Income and Real Estate investments, and the strategies Anchor Capital employs to not only protect capital, but profit from a changing rate environment.

Regardless of the exact timing by the Federal Reserve, one thing is clear: bond investors should heed the warning that we are likely entering a prolonged period of rising rates that will require a more tactical approach to investing.